LEELOO'S ESOTERICORNER
The Thoth Tarot deck, created in the 40's by controversial occultist Aleister Crowley in collaboration with artist Marguerite Frieda Harris is, in my opinion, Crowley's most valuable legacy; the deck is rich in eclectic symbolism, and tracing multi-cultural universal symbols is by far the most powerful message any Tarot deck can have. Crowley was very thorough and picky with the final version of this deck and I think it manages to encompass his vast knowledge of archetypes and symbols, which makes the deck irreplaceable in tarology. Thoth expresses fully the author's flamboyant nature and can be a powerful energy tool, not just with the symbolism, but also from a coloristic point of view and the ability of the cards to trigger certain energetic frequencies in your energetic fields together with the insight. It' s a dynamic deck, compiling many mythologies and archetypes into Crowley's original view of the esoteric world. It has a classical outlook, but at the same time  it is flexible enough to appeal to the reader and the Querent in a way that opens subjective and very personalized portals for self-analysis, prediction and interpretation.
A short presentation of the symbolism in Star (Trump XVII) 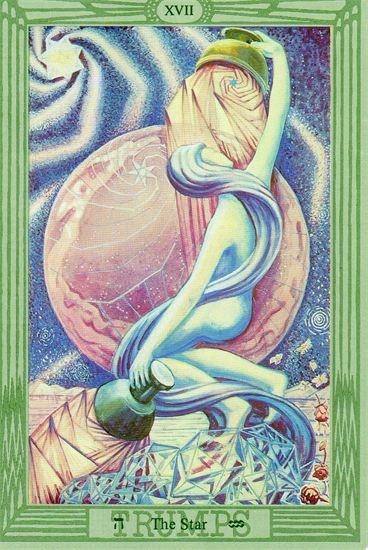 Thoth's Star is a powerful parable of the spiral universe (our own galaxy is one), the web of matter, quanta and the continuum generated by the creative flux in our universe; and universes in general, the idea of universe. You can see the strong correlation of this card with the galaxy filament web (picture below): 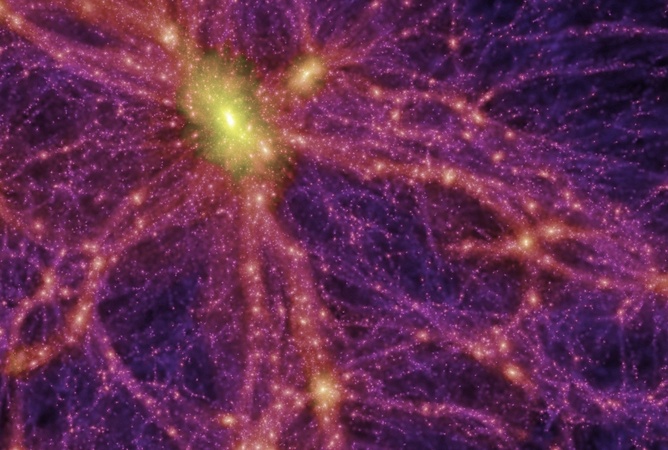 The Star classically depicts a young woman in a bathing ritual; she is of course, the Water Bearer, Aquarius, the one creating the future in a constant renewal of the past, cleansing and transgressing fluids, and also the sign of science and quantum physics. In Thoth, she is also the Goddess Nut, the Egyptian Goddess of the sky and her sacred symbol,Osiris's Ladder, is structured all over the card (Osiris uses this ladder to enter the heavens, her world). She is constantly creating from dark matter, in a perpetual dance of the two cups, a symbol leading us to Astrea, the celestial virgin and even further, to Nut (and later Hathor) as Heavenly Cow, with the two cups pouring the milk (Milky Way) from the breasts of this Divine Mother in many of her forms. 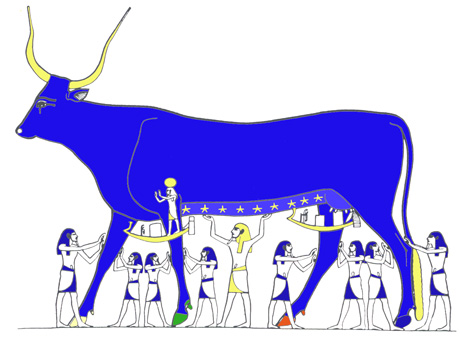 One cup is silver, the other is gold, that alchemical symbol of mind/matter, subconscious/conscious, moon/sun, yin/yang, and the list may continue, also found on Rider-Waite's Temperance card, as another example.
The Celestial globe on the card becomes the sphere of love here, it bears the Kabbalistic symbol of Venus, the 7-pointed star: the power of love to bring hope and manifestation of dreams, universally attached to Trump XVII. She is Binah, the Great Mother, the Sea of Life nurturing the fertile Earth, and making another powerful Tarot love symbol bloom, the Roses. (The Lady of the Rose, one more aspect of the fertile goddess, and also of Venus the Lover). Venus's destiny is to love and inspire love, and our card the Star is as we know a major Inspiration symbol.